3 Things to tell your neighbors about Regionalism and the NEOSCC

A woman from Mentor posed this question during our successful recent Forum :

“I have three kids in their twenties, all living at home.  They asked me ‘why should I care about regionalism?’ Can you share three reasons they should care about the NEOSCC’s plan for NE Ohio?”

Excellent question!  There are a lot of reasons to not like what’s being proposed on the basis of our personal property, our rights, our liberties.  Not all of this is going to matter to 20-somethings, or some of your neighbors.  But here are some points that probably will:

If the NEOSCC’s plans are put in place:

1.) Your next job may not be there. Who would you rather have decide about job growth – your local community, or planners in Cleveland whose first priority is “economic equity?”  The NEOSCC’s plans will restrict job growth by trying to force new development and jobs back to the cities and away from the areas they are looking to expand.  Most job creation takes place over 20 miles from the city center.  Trying to restrict growth outward will chase away prospective employers or those that are here that need room to expand.  These firms will simply move to another region that allows them to grow as they desire. Haven’t we already lost enough  jobs to other parts of the country?

2.) Your next home will be more expensive if you can find one.  NEOSCC discourages suburban expansion over high density, urban living. OK if that is how you want to live, but if you don’t, restrictions on new housing developments will drive up the cost of housing and its availability for everyone. It has in Portland and other places it’s practiced.

And speaking of high density, who wants to live like this?  This is a suggested form of living, in converted shipping containers from the website GreenCityBlueLake. http://gcbl.org/blog/2013/09/how-grace-galluccis-call-for-more-transit-will-scan-at-noaca. 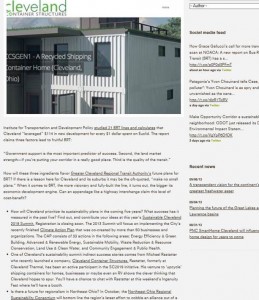 These guys are one of the influential board members of NEOSCC.  The same article here promotes the NEOSCC and calls those who question it as “pushback from groups on the fringe.”  So they promote living in metal crates and we are the ones on the “fringe?!” Do you want these guys in charge of planning YOUR future?

3. You will be asked to pay more in taxes.  Taxes and fees to support “social and economic equity” and other goals set out by HUD, the EPA and NEOSCC.  All these plans cost big money. The Plain Dealer said it best in 2010 as they declared this the decade of the “super region” and boldly asked “How much would you give to save the region?”

As to how much, you won’t have a say. Your local elected officials won’t be in charge. . They want to expand the responsibility for failed urban programs on to the back of suburban and rural taxpayers.